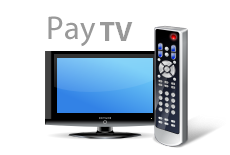 Pay-Television companies are not always the owners of content they broadcast. Often, pay-TV companies are vendors for content owners, who sell to them for re-sale to subscribers. Some others, like DStv, also develop sports and entertainment content, which cost huge sums of money.

Programming content plays a central role in pay-TV competition. And in making a choice among pay-TV companies, a subscriber will have to base his/her choice largely on the programming offered by each one.


To attract subscribers and ensure they renew their subscriptions, a pay-TV provider needs to have must-see content whether in sports,  movies, documentaries, kids' programming, music or other genres of entertainment.

Premium programming, especially live coverage of prestigious sports events and recent Hollywood movie releases, drives consumer choice. By owning the right to broadcast such to its own subscribers, especially exclusively, a pay-TV company is preferred to its rivals. By its nature, premium content is often monopolised from source. Sports content, for instance, requires television rights, which are often sold collectively by the league or is concentrated in the hands of a single pay-TV operator, always one with the requisite financial muscle. The competition for such content is fierce, a situation that astronomically drives up the cost of acquisition.

In the United Kingdom, for example, two broadcast giants, Sky and BT, recently paid over 5billion pounds for the rights to show Barclays Premier League matches for three years (2016-2019). The  sum represented a 70 per cent increase over what was paid the last time. HiTv, the defunct pay-TV company that won the Barclays Premier League rights between 2007 and 2010, did not have the money to renew the contract when it expired. It eventually folded up.

Even for content produced locally, costs do not  stay the same. Content production and content owners are affected by local and international economic indices, a situation that causes an upward reviews in costs when new content contracts are being entered into. The sharp dip in the value of the naira has adversely affected the content market, with content aggregators having to deal with the attendant inflation in acquisition costs.

Local content, like the foreign variety, is paid for in dollars, the international currency of doing business. This is because most pay-tv platforms operate across international borders.

Without adequate payment to content producers, the quality (even quantity) of content production will dip alarmingly. A major reason for the good health of Nollywood and other local content productions like sitcoms, series and sports programmes is that broadcasters have ensured that content owners are adequately remunerated.

The pay-TV ecosystem is dominated by content owners/creators, who sell to pay-TV companies. Pay-TV companies own the customer relationship and make their money from rent on content delivery. The pricing power resides with the content owners, most often large TV networks, which charge affiliate fees. Affiliate fees are the primary revenue stream that funds television content. They are a percentage of what subscribers pay to the service provider, which is then shared back to the content owner or distributor, usually on a per subscriber basis.

Thus, a less notable content owner may only be able to negotiate, say, N50 per subscriber per month, while a big one like Sky Sports, Viacom or Disney can negotiate considerably higher sums per subscriber per month because any pay-TV company would be at a huge disadvantage if it markets a package without the must-see content that the owners offer. The advertising-only TV model of years gone by delivered the lowest common denominator content, while the affiliate fees model has affected how content aggregators think, operate and also how content is produced and financed.

Pay-TV providers have realised that subscribers pay because they want access to certain creators' content like the Barclays Premier League, movies or kids' entertainment. This means content owners could make pay-TV companies pay them ever increasing fees for that content. It gets better for big content owners like Disney, Viacom or NBCUniversal, who could band channels together and compel pay-TV providers to pay affiliate fees for all their channels whether popular or otherwise. Pay-TV companies are the ones that are then left to deal with resultant subscriber anger when subscription is hiked.