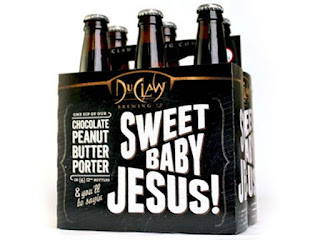 An Ohio grocery chain has pulled a popular beer from its shelves because of its controversial name.
Sweet Baby Jesus! is a chocolate and peanut butter porter by the Baltimore-based DuClaw Brewing Co.
Heinen’s, a grocery store chain based in Cleveland, recently decided to stop selling the beer after customers complained that the name was "offensive."

“When you push boundaries and try to get one group excited about it, inevitably people are going to get upset on one side or the other,” . “The name’s not meant to be offensive, it’s not meant to be derogatory… “We liked the phrase [Sweet Baby Jesus!], which at least to us, is a phrase of excitement or astonishment.”

Benfield said this is the first time the beer has been pulled from a chain of stores. Complaints about the name, however, are not new.

Benfield told reporters that the peanut butter porter has been removed from military bases in the past. But he noted that the beer often ends up being restocked after a few weeks.

"There's a lot more people who are upset they can't get it," Benfield said.