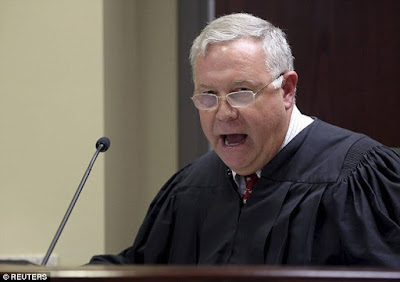 The judge who arraigned Dylann Roof sparked outrage when he referred to the 21-year-old's family as 'victims' and urged the community to 'rally round them'. Charleston County Magistrate James Gosnell Jr told the court on Friday:

The bizarre statement prompted outcry from the victims' families in the public gallery, and a torrent of complaints branding him 'insensitive' and 'racist'. 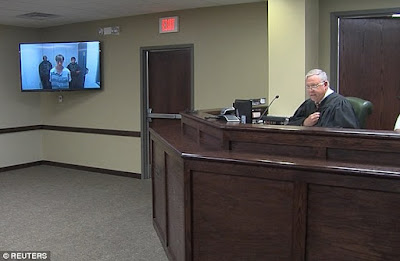 And it has since emerged that the judge was reprimanded in 2003 for using the n-word in court, when he told a black defendant: 'There are four kinds of people in this world - black people, white people, red necks, and n---rs.'

Gosnell was hauled before the Supreme Court for using the n-word in a bond reduction hearing, and two days later unlawfully ordered the release of a fellow judge caught drunk driving. For both, he was merely reprimanded and has remained Chief Magistrate ever since.
He opened the court yesterday with his appeal for people to support Roof's family, adding: 'Nobody would have ever thrown them into the whirlwind of events that they are being thrown into. We must find it in our heart at some point in time not only to help those that are victims but to also help his family as well.'
He then charged Roof, whose grandfather C Joseph Roof is a prominent lawyer in North Carolina, with nine counts of murder. 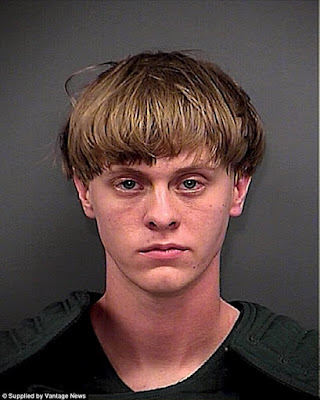 Reacting to Gosnell's statement on Friday, Twitter users erupted in rage at his 'insensitive' and even 'racist' approach to the case.

Mia Farrow, the actress, tweeted: 'Judge James Gosnell of #Charleston is obviously part of the problem. Jesus Christ!!!!'
A user called MiMi wrote: 'Judge Gosnell DONE lost his mind. Right now, who gives a damn! His family bought the murder weapon! #DylannRoof'
And one named Elizabeth said: 'Watching Judge James Gosnell lecture the families of victims in court re: sympathy for Roof family made me sick. Racism not thinly veiled.'
The Daily beast