HP Elite x3 is one of the most powerful smartphones running Windows 10 Mobile, but the recently launched Alcatel Idol 4S is not bad either. Unfortunately, Microsoft's mobile platform is no position to compete with the mighty Android and iOS, so few handset makers continue to launch smartphone powered by this particular OS.

In fact, some even canceled their Windows 10 Mobile projects, although they were pretty advanced in the development. News about such a device surfaced last week when word about a Dell high-end smartphone made headline.

The device was still being prototyped when it was canceled. Still, we've got some information on the Windows 10 Mobile device's specs. Today, we also have a picture to show you, courtesy to reputable leaker Evan Blass.

The so-called Dell Stack should have been a phablet with a huge 6.4-7.0 inch display that would support full HD (1080p) resolution. Moreover, Dell wanted to include an Intel X86 chipset inside, which could have easily turned it into a desktop or laptop device.

Dell's canceled phablet/tablet device should have been packs with a large amount of RAM, possibly between 4GB and 8GB (the first of its kind), as well as 128GB and 256GB of internal memory.

The picture leaked recently shows the Dell Stack comes with a dock that features two slots. The second one might have been filled with a second battery

Rumors about the Dell Stack date from back 2014 when it was expected to be launched on the market sometime in 2017, but now it's believed to have been canned. 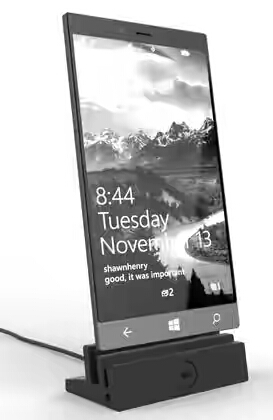