After making its debut on iOS and PC, twin-stick action game Leap of Fate is about to leap over to Android. Developer Clever-Plays announced Leap of Fate will be launched on Android devices on December 1.

Just like the iOS version, the Android game won't come for free, but it won't be too expensive either at $3.99. Leap of Fate is a cyberpunk top-down shooter set in a dystopian world where players take the role of a technomage.

Your goal is to achieve as much powers as possible in order to overthrow the Crucible of Fates, assuming you can survive the trials.

The game is build in a isometric style and feature roguelike elements. The action takes place in New York City, which has become a mysterious testing ground that will magically pit players agains their own psychological demons.

There are more than one hundred magical skill that you can upgrade, thanks to an innovative system of randomly-generated skill trees. Leap of Fate allows players to choose one of the four mages, each with their own gameplay style and storyline.

One thing that you can be sure is that combat in Leap of Fate is quick and deadly, so prepare to die a lot if you're not fast enough.

The game features more than a hundred different types of enemies, but keep in mind that once you die, you will have to restart from the beginning. Are you ready for the challenge?

Leap of Fate for iOS 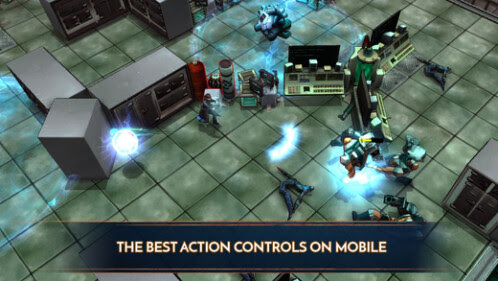 Tap here to load the remaining 4images in this gallery.