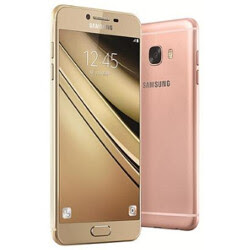 The Samsung Galaxy C7 Pro is expected to be unveiled next month. The handset recently was run through the Geekbench benchmark test which revealed a limited number of specs. The model number is SM-C7010. According to Geekbench, the device carries a Snapdragon 625 SoC inside, equipped with an octa-core CPU that was running at 2.21GHz during the test. 4GB of RAM is included, and Android 6.0.1 is pre-installed.

The phone did appear on India's Zauba import-export site. That listing showed that the Galaxy C7 Pro will carry a 5.7-inch screen, most likely with a 1080 x 1920 resolution. Four units were shipped into India from Korea with each one valued at the equivalent of $199 USD. That doesn't mean that the phone will be priced at that level when it is launched. The value is computed just for regulatory purposes.

So just how did the Samsung Galaxy C7 Pro do on the Geekbench test? The phone scored 1000 on the single-core test and 5679 on the multi-core test. The phone was tested a few times and produced approximately the same score each time.

The Galaxy C-series is usually svelte, although we don't have an exact idea how thin the Galaxy C7 Pro will be. The Samsung Galaxy C7 is 6.7mm thin, so the Galaxy C7 Pro could be in that ballpark. In addition, the Galaxy C7 supports NFC and does have a fingerprint scanner embedded in the home button. We'd expect to see the same thing for the "Pro" version of the phone so that the handset can support Samsung Pay.

With the unveiling expected next month, we could find out everything we want to know about the Samsung Galaxy C7 Pro in the not too distant future. 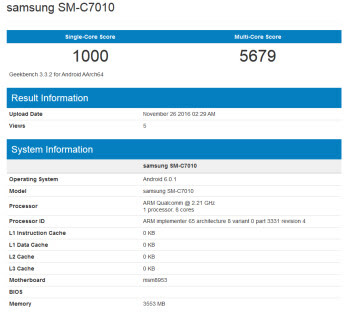