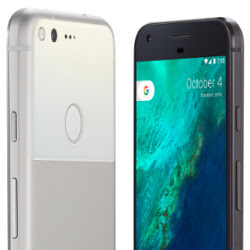 The Google Pixeland Google Pixel XL are the first handsets to be designed by Google. They are both manufactured by HTC, and in the U.S. the only carrier selling the phones is Verizon (more on this 'exclusive' later). One of our loyal Ballowap readers happened to order the 128GB version of the Pixel XL. According to an email he sent to us today, his phone was supposed to have been shipped today. Instead, he received some bad news.

Verizon sent our reader an emailed notification on Friday that probably took the air out of his balloon. Instead of getting word that his 128GB Pixel XL had shipped as expected, he received notification that his order has been delayed. According to Verizon, the phone will now ship on November 26th. "Looks like you have great taste," screamed the top of Big Red's missive. Verizon added that the 128GB Pixel XL is so popular, that the carrier doesn't have enough inventory in stock to ship the order on time. Has anyone else received a similar notification from Verizon pertaining to a delay in the shipping of their 128GB Pixel XL order?

We also wanted to point out that even though the phone is supposed to be a Verizon exclusive, it will work with other carriers. You might recall that T-Mobile is running a promotion that will return half the cost of a 32GB Google Pixel ($325) to anyone who has his Pixel activated on T-Mobile. The carrier's CEO John Legere says that the handset has been tested on T-Mobile's LTE pipeline. 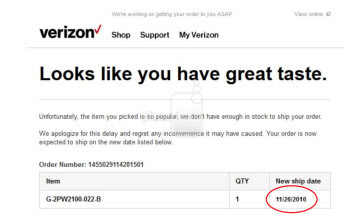