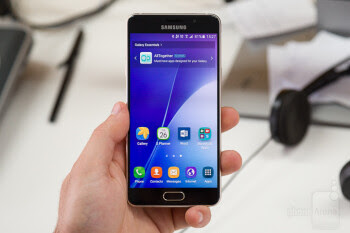 Samsung may be hard at work to bring Android Nougat update to its MVPs — theGalaxy S7/S7 edge and Galaxy S6 models, the Note 5, and the Galaxy Tab S2 — but the company will be giving its budget Galaxy A lineup the same treatment, apparently. According to a new report by SamMobile, the South Korean tech giant will be updating its current lineup of Galaxy A smartphones, meaning the ones released in 2016, to Android Nougat at some point in the future.

There is currently no rumored time frame for the Galaxy A update program, but given how many devices there are in the 2016 lineup and that it is a smaller priority for Samsung, it will likely take a while. Samsung is currently actively testing beta builds of Nougat for the Galaxy S7 and S7 edge with a final release expected to arrive in early 2017. The company is also working on an update for last year's S6 and S6 edge, as well as an interesting Nougat treatment for the Galaxy Note 5 that will bring Samsung'sswanky GraceUX interface and many Note 7-like bells and whistles to the Note 5.

The Galaxy A series has been around since 2014 and has traditionally enjoyed an enviable amount of support from Samsung, for a non-flagship Android smartphone line that is, and if the rumors are to be believed, this year's Galaxy As won't be an exception.