There was no big announcement, no hoopla, and no product introduction video starring the voice of  Jony Ive. Right under everyone's noses, Apple launched a 32GBApple iPhone 6 in Gold for certain Asian markets. When the iPhone 6 was originally released in 2014, the phone was offered in 16GB, 64GB and 128GB variants. The phone is considered new because Apple never had an iPhone 6 model for sale with 32GB in native storage.

The unit has been available in China since late last month as a low-price version of the iPhone. It will launch on Taiwan Mobile on March 10th. The model will not be available from retail stores or from Apple's website. There, the low price choice remains the Apple iPhone SE. The latter is more powerfully spec'd than the iPhone 6, but with a smaller 4-inch screen.

Taiwan Mobile is offering the 32GB iPhone 6 for free with a monthly plan priced at the equivalent of $45 USD a month for 30 months. The carrier is calling it a limited-edition model. On the Taiwan Mobile website is a countdown timer that ticks down toward the March 10th launch. 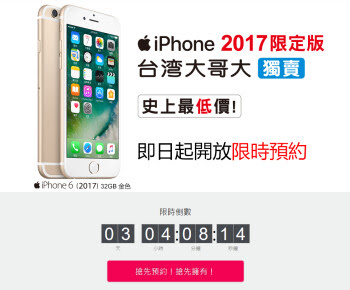