Recently, the smartphone was spotted at Wi-Fi Alliance, another stop the Galaxy J7 (2017) must make before going official. After receiving its Wi-Fi certification, the handset should be ready for prime time since it has already cleared the FCC and got its Bluetooth certification not long ago.

The Galaxy J7 (2017) is a decent mid-range handset, which, according to the Wi-Fi Alliance documents, will ship with Android 7.0 Nougat operating system right out of the box. 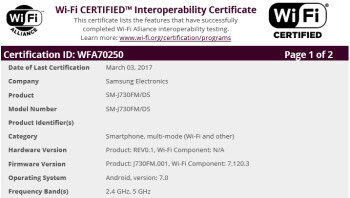 Hardware-wise, the device is just as competitive thanks to an octa-core Qualcomm Snapdragon 625 processor. The powerful CPU is paired with just 2GB RAM and 16GB of expandable memory.

We've also learned the Galaxy J7 (2017) is supposed to pack a 13-megapixel rear-facing camera and a secondary 5-megapixel camera on the front for selfies and video calls.

So, there you have it, folks. Samsung Galaxy J7 (2017) is one step closer to release, at least in the United States.