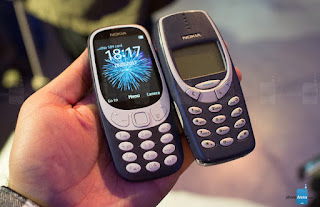 A new Nokia 3310 was indeed announced at MWC 2017, and will hit shelves in select markets starting the coming months,costing about $49 / €49. And we just had to publish this Debate, asking our readers whether or not they'd buy the handset. As it turns out, plenty of people - 42.24% of all voters - certainly plan to purchase the new 3310. Another 25.64% may also want to get the handset, but only driven by nostalgia towards the original model. Finally, 32.12% of voters had/have no interest in getting this device.
After spending some hands-on time with the new Nokia 3310, we have to say that we were rather underwhelmed by it. The phone simply doesn't feel as sturdy as the original, and brings little value in today's market. Moreover, this modern 3310 does not offer Wi-Fi or 3G connectivity - it's a 2G-only device, which means that accessing the web (via the built-in basic browser) will be a pretty frustrating experience. Well, at least the phone has a rear camera that lets you take fabulous photos, and battery life should be great.
Mind you, the new Nokia 3310 won't be released in the US, at least not in the near future. Buying a global version of the phone won't really help in this case, as this doesn't support US 2G bands - basically, you'd be getting the handset just to play Snake on it.
Would you buy the new Nokia 3310?