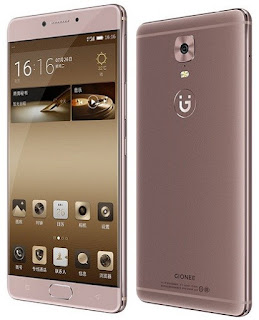 M6 from Gionee comes as a successor to Gionee M5 that was released last year, but with much more improvement in specs and security. M6 is a 5.5-inch Amoled display device with a 1080 x 1920 pixels screen resolution and an awesome 401 ppi pixel density. It comes with a 5,000 mAh battery, 4GB RAM, Android 6.0 Marshmallow, Octa-Core processor clocked at 1.8GHz, Finger Print sensor.
Gionee M6 is the first smartphone in the world to use a 128-bit hardware encryption chip. This technology coupled with the fingerprint scanner stylishly placed at its back, guarantee your mobile security and privacy from cyber attacks.
It is powered by an Octa Core Mediatek MT6755 Helio P10 chipset processor with its clock speed at 1.8GHz. Gionee M6 device comes in two variant, there is a 64GB and 128 GB internal memory, both expandable via a micro SDcard up to 256GB. It rocks a Non removable 5,000mAh battery while M6 Plus rocks a non-removable 6020 mAh battery.
Read Also:- Gionee S10 Full Details and Price in Nigeria