Recently, the South Korean giant Samsung announced the launch of Mobile Security Rewards, it’s new reward program that will pay $200,000 users who will find problems and security errors in the software of their mobile devices. 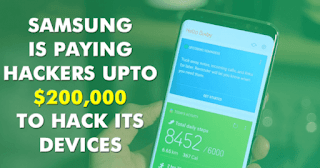 The South Korean giant Samsung announced the launch of Mobile Security Rewards, it’s new reward program that will pay $200,000 users who will find problems and security errors in the software of their mobile devices. This proposal is similar to what other large technology companies offer and is intended to know the progress of the interface of the Korean firm.

This strategy allows detecting and correcting failures before they are detected by cyber criminals. The tech giant companies like Google, Microsoft, and Nintendo themselves are some of the companies that carry out such programs like the Bug Bounty Programs, initiatives that expose vulnerabilities.

The South Korean company joins this trend with the launch of its initiative. In January 2016, Samsung started this experiment with a pilot, but will now be available to all researchers and hackers in white hats (so called because they do not use their knowledge to commit a crime).

The South Korean giant Samsung invites experts to evaluate the integrity of their mobile devices that currently receive security updates on a monthly and quarterly basis, such as associated software.

There are 38 mobile phones and tablets in the Galaxy S, Galaxy Note, Galaxy A, Galaxy J and Galaxy Tab series, including the S8, S8 + and Note 8. Likewise, it will reward those who find security defects in Bixby, Samsung Pay, Samsung Account and Samsung Pass.

The rewards that researchers will receive will depend on the number of bugs reported and the severity of the error encountered, as well as the expert’s ability to document the bug and display a proof of notion. The minimum payment will be from $200 to $200,000.

So, if you know a lot about computer security and want to participate in this program, you can access the link from here.