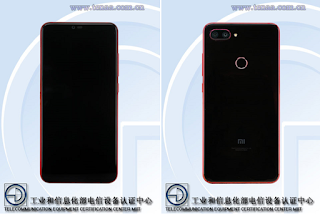 The low-end version of the Xiaomi Mi 8 flagship family, the Mi 8 Lite, will apparently be soon available in a new color, and with a bump in RAM to 8MP. The Mi 8 Lite was just unveiled a month ago, carrying a notched 6.3-inch LCD screen and the Snapdragon 660 Mobile Platform under the hood. There were two variants, one with 4GB of RAM and 64GB of native storage, and the other with 6GB of RAM and 128GB of storage.


According to Chinese regulatory agency TENAA, the model number of the updated Mi 8 Lite is M1808D2TT and it has a black front and back with a middle frame and side buttons in orange. The rim around the camera looks almost purple and the ring around the fingerprint scanner could be pink. Perhaps more importantly, the specs reveal that there will be an option with 8GB of RAM.

Some specs listed on TENAA are a bit different than what we see on the current version of the Mi 8 Lite including a 3250mAh battery vs. 3350mAh on the already released unit. And while TENAA shows that the 24MP selfie snapper in front remains on the updated model, the regulatory agency lists the dual camera setup on back as having a 12MP primary sensor and an 8MP secondary sensor. The phone, as it is now, carries a 12MP primary camera on back along with a 5MP depth camera for portraits.

Now that this new variant of the Xiaomi Mi 8 Lite has received certification from TENAA, we would expect it to be officially announced shortly.